Those of you familiar with these pages and my writing style surely know by now that I am prone to florid hyperbole and literary detours, but please bear with me when I state:

Today I present to you just about the best new song I’ve heard all year.

A few years back I worked as the doorman for The 55 Bar, a relatively small basement club in Greenwich Village that tended to host some of the most talented musicians in the modern scenes of jazz, blues, and the variegated spectrum between the two. Now, the roster of tremendous talent that frequented this establishment is something I will certainly get around to featuring in these pages. However, my nights there generally consisted of crowd control, selling tickets, setting up the stage and equipment, negotiating both the junkies shambling from Christopher Park across the street and the over-stimulated homosexuals from the surrounding clubs, listening to some of the most extraordinary live music of my lifetime, and drinking my weight in Maker’s Mark.

That doorway next to the stairs is where you could find me huddled through most long winter nights.

Now, flash-forward to this past June 7th, when I attended the “A Celebration of the Life and Legacy of Levon Helm” tribute concert at Club Helsinki in Hudson, NY.

I must say that the major draw for me was that a contemporary songwriter whose work I love, Elvis Perkins, was scheduled to perform. He did not disappoint as he happened to play a rendition of one of my favorite The Band songs—Music from Big Pink outtake: “Yazoo Street Scandal” (featured here for my own Helm tribute).

Although I was familiar by name only with the majority of performers listed—The Felice Brothers, Shivaree’s Ambrosia Parsley, The New Pornographers’ A.C Newman, Diamond Doves (who are the “Dearland” component of Elvis Perkins in Dearland), Elegant Too, and others—that night featured various configurations of these musicians performing spirited renditions of Helm tunes together. The sense of camaraderie on stage was magnificent, permeating the venue, and leaving the crowd with the impression that they experienced something joyful, which—regardless of many a band’s obvious talent—is something too rarely experienced at a concert these days. This sentiment perfectly complimented the democratic spirit of Levon Helm’s music.

Now, while my wife and I watched the show from the stage’s edge (and by the wobbly video above you can tell we were dancing and singing along too), there was one talented player who was incredibly familiar: A lanky-limbed kid with a chin and nose made prominent through contrast with a thick black mustache and chops, who continually switched from being a member of the horn section to playing the piano, and occasionally conducting the crowd while singing lead. My Wife (who also worked at The 55) and I were convinced that this kid must’ve played there—most likely alongside the singular saxophonist David Binney, was my guess. So as the show ended we approached him and as it turns out, he was not a performer at The 55, but a regular: one of those young students who, despite their good manners and apparent respect for the music, always mildly annoyed the servers; annoyed because, with these customers’ steady penchant for only ordering coffee, soda, and tea, the bartenders knew there was not much of a tip headed their way. However, after catching up through a brief but humorous chitchat (during which he displayed a cheerful demeanor and a gracious acceptance of each compliment) I knew that this kid named Adam Schatz was someone worth cocking an ear towards in the future.

With his words and mannerisms marked by an affable bounce, Adam Schatz explained that he was responsible for arranging all the horns that evening, and (after first being sure to give the majority of the credit to the event’s organizer and Diamond Doves’ drummer, Nick Kinsey) that the show itself was in part presented through the non-profit organization he founded: Search & Restore. As he states on the organization’s website, it is “committed to bringing the artists and audiences of new jazz and improvised music together in new ways, while never forgetting it’s DIY roots.” In a sense the organization operates as a promotional tool and resource for a whole slew of talented artists, but to my mind it seems to exist as well to remind the world that the culture of Jazz need not be relegated to archives and museums. It need not be a relic, xanthous with age and only admired through the protective glass of static sentiment and tradition. Music is a protean organism, it declares, and one that can be fully enjoyed out there this very night. In other words, as he stated when speaking to Ben Ratliff for The New York Times in 2010: “My mission is to bring people together around art. We don’t care who you are or how old you are. We just want you to get down.” 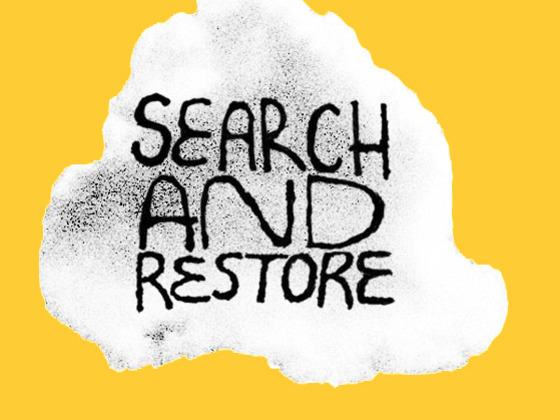 It was this very same positive attitude that made me wish to explore his music further. As it turns out, he seems to be pretty prolific, and certainly busy. Along with running Search & Restore, he participates in numerous music projects, including the Brooklyn based twelve-piece afrobeat group, Zongo Junction; the nine-piece psychedelic soul band, The Shoe Ins; playing self-described “zombie Jazz” with the band Father Figures; and the “melodic mayhem” of the improvisational duo Blast Off!; as well as performing solo under the moniker of Mrs. Adam Schatz (in honor of his “invisible and imaginary wife”). Catching a show of the latter this past Saturday, I must say these solo shows are incredibly amusing, filled with spirited asides, improvisation, and audience participation. In addition to all this he recently informed me that he would be joining the brilliantly idiosyncratic band, Man Man.

However, today’s song comes from yet another group of his, Landlady. This six-piece group is a dynamic exploration of what can be achieved through the big fun of pop music. Released as a digital single this past month of September, “Above My Ground” is, as I stated above, just about the best new song I’ve heard all year. Delicately constructed, each element of the song is flawlessly implemented to arouse sincere pathos in the listener. It does so without resorting to plunging into the emotional schlock and pompous mewling many pop groups rely on in the hopes of receiving a little empathy in response to their disingenuously contrived ballad. Exquisitely hypnotic—through its ambient chiming, martial drumming, and the warm yelp of Schatz’s vocal, alternately ascending and descending the steps of each phrase in perfect rhythm, there is a true human quality to this song. This is a current I hear in the majority of his music; even considering certain reeling heights of dissonance, or the more manic Muppet moments of some of the compositions, the listener always gets the sense that there is an actual person there behind the curtains of these sounds. This quality is particularly evident as the song builds towards the chant of its crescendo; a chant that—to paraphrase his words when encouraging the audience to sing-along—is meant to be shouted at the heavens so that things can be OK, at least for the moment.

Below are the two videos the group released for this song, each with its own organic focus. I leave it up to you to decide which one you prefer, but with a song this infectious, I recommend you play one, wait a few minutes and then play the other.

“Above My Ground” by Landlady.

Recorded at the Bunker Studio by Jacob Bergson and by Adam Schatz in his basement, mixed and mastered by Tom Tierney at Spaceman Sound.

You can learn more about Landlady, purchase their music, and listen to this song’s b-side (a sultry cover of the Pixies’ “Oh My Golly”) all here:: http://Landlady.bandcamp.com

I highly recommend you attempt to catch a live show by Adam Schatz in one of his various musical incarnations, and in fact it appears that due to his hectic schedule, Landlady will be playing their final show of 2012 at 9pm on Saturday, November 3rd at Pine Box Rock Shop, located at 12 Grattan St., Bushwick, Brooklyn.

You can experience a bit more of Adam Schatz and his music here, http://zombieville.tumblr.com/ and here, http://AdamSchatz.bandcamp.com.

So, Adam Schatz is certainly someone to look out for in the future, but much more than that, he’s someone to listen to right now.

P.S. As an added bonus (and perhaps to act as a final testament to how much I’m digging this tune right now), here’s Mrs. Adam Schatz performing “Above My Ground” solo at the NYC club, Le Poisson Rouge on September 7th, 2012.

Schatz, A. (2012). About Search & Restore. Retrieved from http://searchandrestore.com/about

2 thoughts on “ALWAYS: “ABOVE MY GROUND” BY LANDLADY”