From time to time, in search of a relatively obscure psychedelic relic, I visit the superb blog site, Dr. Schluss’ Garage Of Psychedelic Obscurities. Other than having excellent taste in curating this site, the man behind the blog also creates his own music under various monikers. Over the years I have grown to be quite a fan of the electronica-tinged instrumentals and restrained psychedelia he creates under the sobriquet of Damaged Tape.

Working independently from the traditional movie industry, Gonzoriffic’s films tend to lean towards the “B” side of things (albeit delightfully on purpose), and seem to celebrate the same ethos and aesthetics that are examined in Elijah Drenner’s entertaining and insightful documentary, American Grindhouse; films, which at their best are just as much about empowerment as they are “exploitation.”

To my mind, this soundtrack could have just as easily served to add ambiance to artist, collector, and “rephotographer” Richard Prince’s 2011 exhibit at the Bibliothèque nationale de France, Paris, which was likewise titled, “American Prayer.” 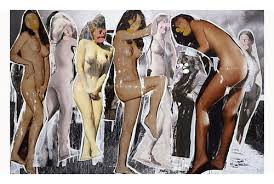 And check out a trailer for the film itself:

Although I may favor the A-side of things, Damaged Tape’s work for Cannibal Sisters features some adventurous use of tribal-like drum programming bumping and grinding up against caustic electronics and simmering digital blips, all put over with captivating, bent guitar strings that seem to be searching for a circuitous route into your head—take the whacked-out funk of “Cannibal Festival” for example:

And here’s the trailer:

Reminiscent of the fascinating sounds composed by prog-rock band Goblin for Dario Argento’s mid-seventies Italian horror films, as well as John Carpenter’s stunning work created to score his own films, such as 1976’s startling (and must-see) Assault on Precinct 13, but with a much more prominent sense of lust emerging from the nervous synths; you can pick up these soundtracks and so much more of Dr. Schluss’ stuff for free over here at his site.

So go on and check it out!