If you dig the mix then please feel free to pass & post it along; if you dig an artist then please support them and go out and pick up some of their stuff.

Hello All! Here’s a quick one for The Fall. 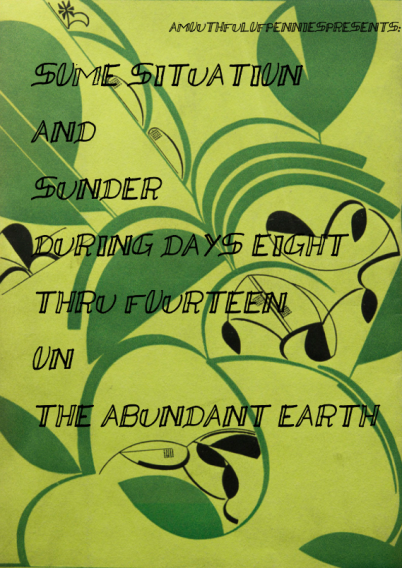 Some Situation and Sunder During Days Eight

Thru Fourteen On The Abundant Earth

in his swollen tower,

sings of the indigo evenings and the soft hour

lives are spent searching thirsty for.

Leaning over the parapet

of his tower, the recluse gets

irate at this metropolis

of candles lit, and so, with lips

pursed, he spits, this done with the hopes

to extinguish at least one single flame tethered by a black wick.

Out in the field, beasts of the earth consume vegetable meat;

fluid and blood splattered on her ankles, on her bare feet.

Anticipating from Adam an alimony check,

she lies prostrate in the dust, braids her raven tresses, waits,

and proceeds to procreate her sundown breed

within vision of Eden’s combustion gate .

and The Skeleton Crew

the ladies of passing fashion.

gets his rest while within

pitched amongst the vapor

roll along a paper trail of tears.

He is hoping for a cure

“Everything is coming up roses.”

with her wardrobe bible

tucked under her left arm,

while all the double-parked cars sat idle

in the warm sunset soot of monoxide armor.

detail: her eyes, blue steel off the rail;

all else, fluid limbs of collision flames;

curves of metal awry, out of reach.

serves as a belt buckle,

where her two thumbs are hooked

over the amber glass.

She ensnares every pliant eye

in the iron of her gestures.

coughs blossoms of blood from the lungs when he sees this blonde disaster.

The skeletal cool kids abscond behind a magazine curtain,

where they all paint their sex organs with the scent of neon cologne.

Bill’s jaw drops as his lips fall slack, and he remains stuck uncertain.

He could not help but rubberneck and question the motives, divine,

in the bedlam of her approach. 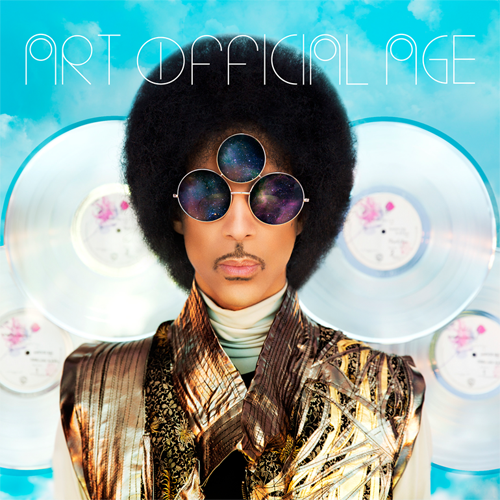 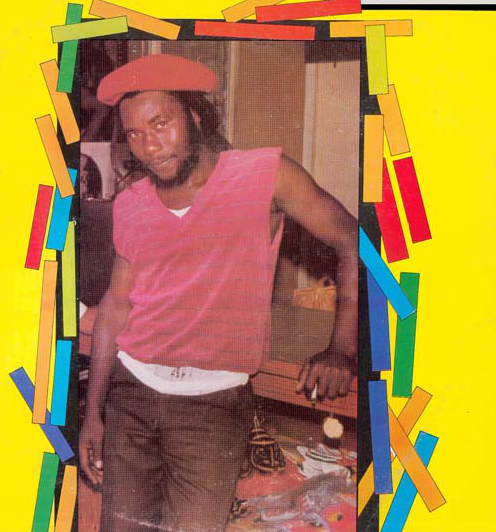 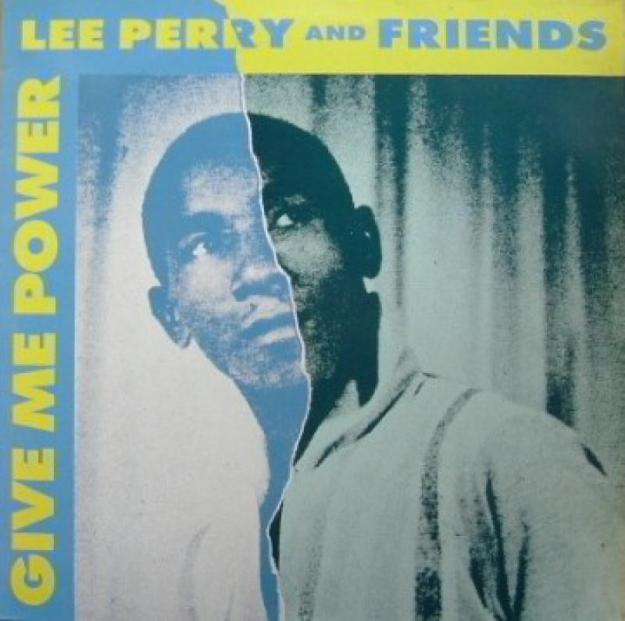 [Give Me Power – The Stingers ] (produced by Lee “Scratch” Perry)

[For What It’s Worth – Staple Singers]

[Let Me Be Good To You – Carla Thomas] 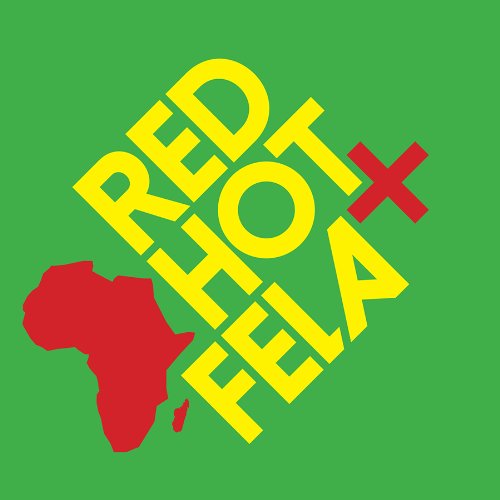 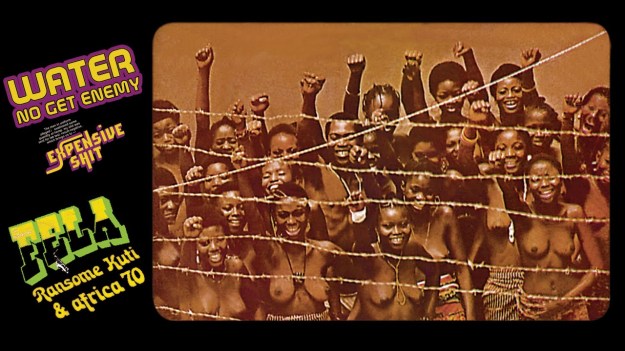 [Water No Get Enemy – Fela Kuti]

[Nobody Knows You When You’re Down And Out – Nina Simone]

[If Somebody Told You – Anna King] 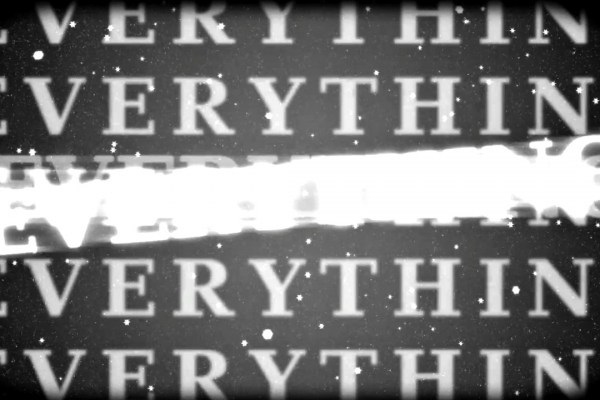 [I Can’t Give Everything Away – David Bowie]

Well I’ve got another triptych treat for you here today!

A friend recently asked me to create roughly four hours worth of appropriate tunes for an event she was helping to plan and present. Unfortunately, at the last minute she couldn’t use them. However–despite being put together on some short-notice and the fact that the majority of my albums are still packed up in boxes from a recent move–what I got left holding are what I consider to be some real dope MixTapes with a nice and easy forward groove going for them.

Hopefully they’ll help you bend your knees, bop your head, and swivel your hips a bit on through this whole supposed “…in like a lion and out like a lamb…showers/flowers…” business we’ve been going through.

A Mouthful Of Pennies Presents: 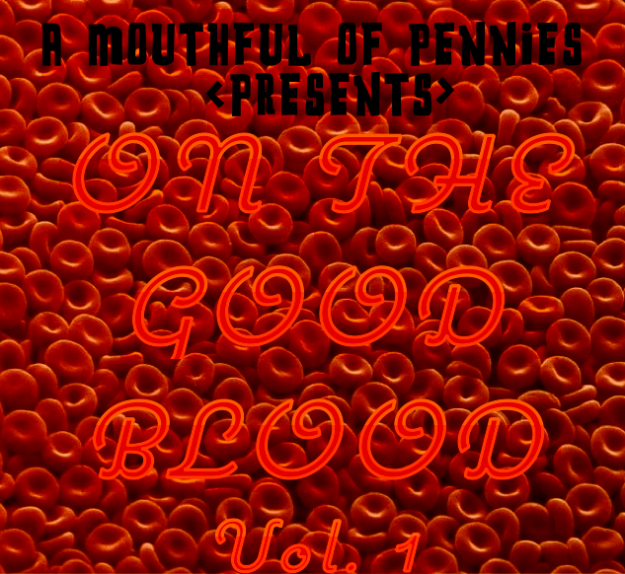 A Mouthful Of Pennies Presents: On The Good Blood (vol. 1) 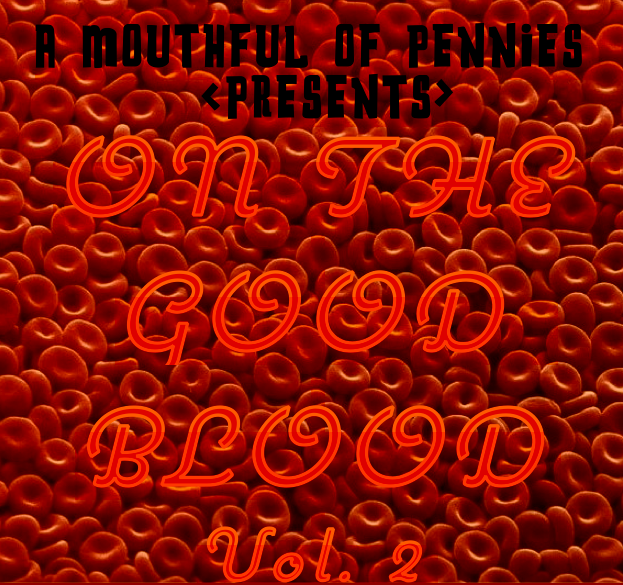 A Mouthful Of Pennies Presents: On The Good Blood (vol. 2) 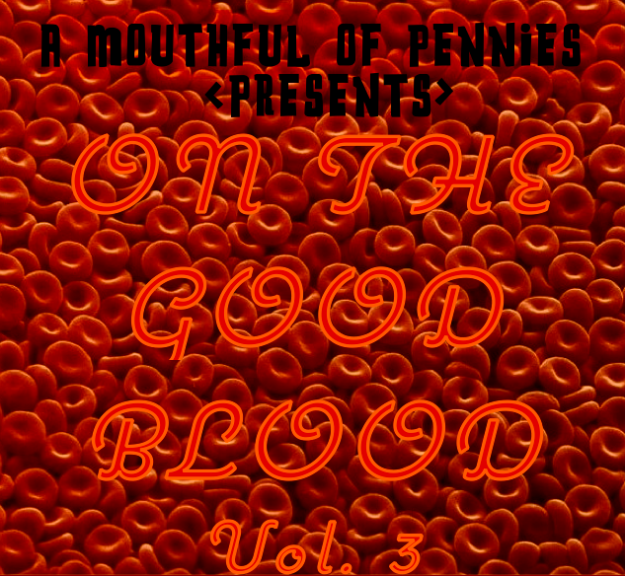 A Mouthful Of Pennies Presents: On The Good Blood (vol. 3)

Baby Huey and the Babysitters 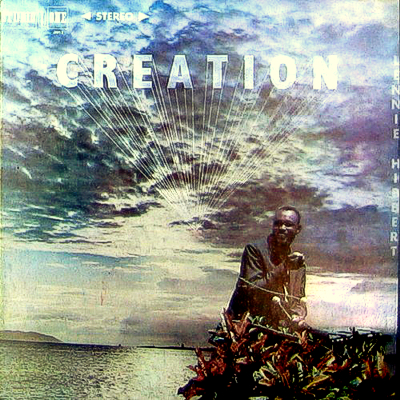 Patty and the Emblems 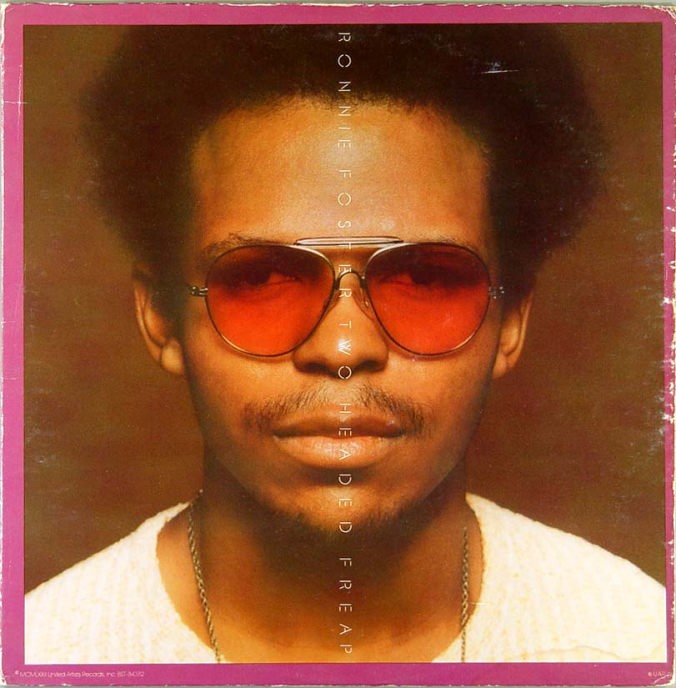 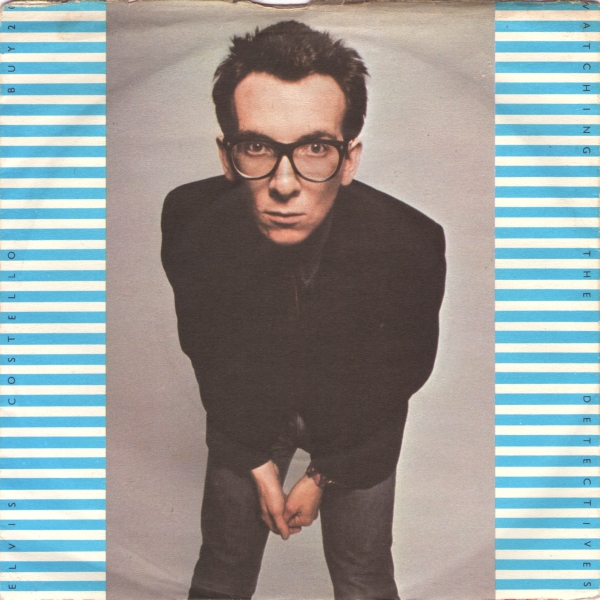 The Fall officially began a few days ago and so I have a two-for for you today; both tracks concerned with the theme of women letting their love come down.

Up first is an artist who inexplicably is not a household name. Working extensively with the top-notch writing and production team of Isaac Hayes and David Porter—who at the time served as the prolific house composers for Stax Records—and backed by such legendary musicians as guitarist Steve Cropper, bassist Donald “Duck” Dunn, and drummer Al Jackson, Jr. (all members of Booker T. & the M.G.’s), how an artist as talented as Ruby Johnson failed to hit it big is beyond me.

When it came time to lend her distinctive contralto vocal style to these compositions, Ruby was willing to explore the full emotional range of each song. At the prefect moment Ruby could thrust her immense and torn voice forward through the melody and let it hang there raw and ragged as a display of her sincere investment in the material, which too few singers have the ability to convey. She actually attributed her trademark sound to her enthusiasm and work ethic: “I think a lot of that came from actually being on the hoarse side at that particular time. I didn’t get to go to Stax often, and when I did get down there to record, we worked hard. We were in the studio all day and half the night” (Perrone, 1999).

Born April 19, 1936 in Elizabeth City, North Carolina, Ruby Johnson was raised in the Jewish faith and began singing alongside her eight brothers and sisters in the Temple Beth-El choir. Upon finishing high school, Ruby began performing with local rhythm and blues bands in Virginia Beach and Washington DC while supporting herself as a waitress. Her career came to be managed by local entrepreneur Never Duncan Junior who subsequently hired the talented Dicky Williams to serve as arranger/producer for her recordings. In 1960 they began to release a series of 45s, first on the Philadelphia-based V-Tone label, and eventually for her manager’s own NEBS Records (Sir Shambling, 2012).

While working for Washington DC station WLOK, disc-jockey Al Bell had been an early proponent of Ruby Johnson’s music. When Stax hired him as its first in-house promotional manager in 1965, Bell helped Ruby secure a contract with the preeminent label for Southern Soul. Al Bell himself would go on to own Stax during the label’s ’70s heyday; unfortunately, it was under his leadership that the company was forced into involuntary bankruptcy in 1975 (Sontag, 2009). Her 45s now being issued on the Stax subsidiary label, Volt, Ruby later recalled that she was “[…] very excited, very nervous, because that was my first attempt to record on that level. […] They would give me those songs on a piece of paper and say: ‘here’s the lyric.’ We would sort of run over them to let me get familiar with the words, and then we’d say: ‘let’s do a take.’ We were in there for hours sometimes” (Perrone, 1999).

Although several of her records sold fairly well, her recording career never seemed to reflect her great talent and a good deal of Johnson’s Stax sessions remained in the vaults until 1993, when the compilation I’ll Run Your Hurt Away was released. Ruby Johnson eventually quit the music business in 1974 and went on to be the director of Foster Grandparents, a federal program helping handicapped children relate to older generations. Although she continued to sing twice a week at Temple Beth-El near her home in Lanham, Maryland, Ruby admitted to missing the old days: “Every time I see some of those big shows, I long for it sometimes, I really do. I enjoyed what I was doing. […] I always aspired to be a professional singer, even as a child” (Perrone, 1999). Sadly, Ruby Johnson passed away at the age of 63 on July 4, 1999.

“When My Love Comes Down” is as fine an example of Ruby Johnson’s talent as you can get, and certainly one of the best 45s ever issued by Stax. Released as the flip-side to the tender ballad “Come To Me My Darling” on October 19, 1966, “When My Love Comes Down” features a gentle melody played on the organ (either by Booker T. or Isaac Hayes) exquisitely contrasted with the punch and pierce of Steve Cropper’s chopped guitar and the The Memphis Horns‘ emotive blare; all-the-while Ruby’s intense vocals alternately smolder, swagger, or just plain tear at the seams.

Up next: Although this track could perhaps be considered lighter fare than the above, Evelyn “Champagne” King’s #1 R&B hit “Love Come Down,” off her certified double platinum album of 1982, Get Loose, is another fine example of superb arrangement and production value, albeit from a completely different approach.

There’s a certain simmer and bounce to the streamlined synth-funk of this song that makes it stand-out against the assembly-line beats that began to dominate the digitally recorded music of the 1980s. Unlike the majority of music in this category, here is a dance song that is still permitted to have character.

Written by the multi-talented Kashif—a pioneer of hypnotic synth grooves and guitar sheen—he shared production duties with Morrie Brown. When Get Loose was released Evelyn King was in the midst of a somewhat career comeback, as she was crossing over from Disco to R&B. Born in the Bronx on July 1, 1960 but raised in Philadelphia, her career has a bit of a storybook beginning. A 16-year-old Evelyn was working as an office cleaner at Philadelphia International Records when producer Theodore T. Life who had overheard her singing in a washroom discovered her (Hogan, 2012). She was eventually signed to RCA Records and had a string of hits with the label. With its slippery, yet coiled bass-line, up-beat vocals, and quirky chimes and blips it is not difficult to imagine this song as a precursor to Prince’s brilliant B-side of 1984, “Erotic City.” Enjoy a bit of bouncing around with this number, and hopefully this autumn will treat you all right.