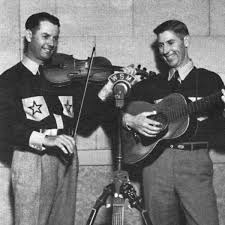 Although recorded only four years after Geeshie Wiley’s “Last Kind Words,”  Sam Mcgee’s “Railroad Blues” could be considered its polar opposite. While Geeshie’s narrator drifts with a dour posture across the American landscape, Sam’s seems to dart off in all directions, long-limbs jerking, in a frenetic search for thrills. Arriving at the same depot where Geeshie could only cry “some train don’t come, there’ll be some walkin’ done,” Sam perceives the potential for further pleasure:

“Went to the depot, looked up on the board

It read good times here, but better down the road.”

Sam Fleming McGee was born May 1st, 1894, just 20 miles south of Nashville in Williamson County, Tennessee. His brother and musical partner, Kirk, was born four years later on Nov. 4, 1898. While Kirk was instructed by their father to play the fiddle, Sam began on the banjo and switched to the guitar in his teens. A phenomenal “finger-picker,” Sam developed an alternating bass style, in which would play the melody on the treble strings with his fingers while playing rhythm with his thumb. This style is at the crux of what was to be called “Country-Blues,” incorporating the emotive flourish of a blues-rag into the typical “time-keeping” role guitars played within a string band (Bluegrass Messengers, n.d.).

The McGee brothers were often billed as a comedic act—an act that was certainly developed with the help of Macon, who had been a seasoned performer on the Vaudeville circuit—and this facetious element is indeed evident in “Railroad Blues” with lines like:

“I met a little gypsy in a fortune telling place

She read my mind, then she slapped my face.”

When not playing, Sam worked as a farmer for the majority of his life and died at the age of 81 in a tractor accident on the family farm on August 28, 1975 (Brennan, n.d.). However, I can envision the Good-Time-Charlie character of  “Railroad Blues” still traipsing from back roads to Main Street, singing dirty ditties to neighborhood kids and winking at the women. The song brings to mind Jack Kerouac’s depiction in On The Road of Neal Cassady as a man aware of all the sadness in this world, and yet still out in pursuit of whatever kicks he can get: A “HOLY GOOF” (Kerouac, p.176, 1957). As each sinuous note of “Railroad Blues” cascades by I can see the man: great big wanton grin on his face; an appetite in his belly; and perhaps a dollar or two in his pocket—perhaps not even a penny.

And as an added bonus, recorded on the same day of August 15, 1934, with The McGee Brothers, is Uncle Dave Macon’s clawhammer banjo classic “Don’t Get Weary Children” (which Morgan O’Kane & band played a pretty raucous version of at my wedding).